The Gardener and the Apple Tree

Someone recently wrote to me and said, "I believe humans have infinite value. I believe I am an expression of experience and that the root of my consciousness, the root of all my energy, like an apple connected to a tree of life, is an extension of God. Just as you can touch an apple still connected and say, "This is an apple tree, " I am humanity. And just as you can point at that apple as an example of the creation of nature, I am God's creation. I believe I have infinite value because I believe God does not make junk." 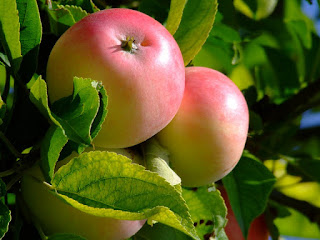 I believe God is the Gardener who planted the apple tree, not a tree of life, but the tree of life. Without Him, there would be no apple tree, no apples, no soil, no water, no nutrients, nor sunlight. Nor would there be anyone to admire the beauty and fragrance of the tree and its fruit. I believe that tree, which was the highlight of a full and diverse garden, was perfectly started. We started as the apple of His eye.

But then, two apples, a male and female, decided they did not need the tree in order to be fruitful. "Look how delicious and nutritious I am! The worm told me so. Why has this knowledge been hidden from me?" They proudly exclaimed this as they pulled themselves loose from the branch by which they were attached to the tree. The two apples suddenly realized what they had done as they fell; it was a suicide mission. The gardener had warned them, but they did not value His wisdom more than their own.

Since then, all apples have fallen to the ground and continue to fall. Sure, they carry seeds to reproduce themselves apart from the tree that is their true source, so there are many apples. But life without connection to the true source was empty, temporary, and meaningless. They constantly attempted to make their own ideal gardens, but not all apples agreed what this meant.

Some gave up. Some smashed other apples to get their way. Groups of apples, called breeds, began to isolate and form boundaries to protect themselves from unwanted outside influence of other breeds that differed in so many ways, some being superficial. But, this also had the unwanted affect of keeping them confined, requiring rules and structure that further dampened their individual spirits.

Some fruits prematurely spoiled and rotted, taking others nearby with them. Not only were there distinct breeds, but there was a growing perception of good and bad fruit. With that perception came judgment. With judgment came action. The breeds felt the need to protect themselves from their own kind as well as outsiders. But, by labeling these "bad apples" in such a way that "kind" has little to no part of their identity, it was easier to cast them out of the garden. Reconciliation was not the goal; longevity was. Getting was. Then, the garden could maintain the appearance of being good and fruitful. It could justify itself, and detach itself from problems it could not solve.

Other than those first two apples that grew from the original tree planted by the Gardener, before they fell (or rather, jumped), none sought the Gardener for wisdom on how to get back to Him. Several know He planted such a tree. Yet, they preferred to invent a tree from their own imaginations, and worship a product of their own doing. Surely, this experience seemed wonderful. But, they did not know the Gardener, or realize He has a much better plan. They did not listen to Him. They figured they already have what they need. Besides, by now the Gardener must be filled with unquenchable wrath, they thought, because He's been ignored. To seek Him would have to be a constant appeasing of this wrath, they reasoned.

In the meantime, the Gardener had compassion on the fallen fruit. He knew what they truly needed. He greatly desired it for them. He knew they can't sustain themselves forever. He didn't want to put a band-aid on the situation and simply repair their gardens, though that's what the apples continually ask for. He joyfully wants to give them a new life altogether. But, neither does He want to force a solution on them. That wouldn't be fair and true to the apples. The Gardener decided the apples must come to realize that life would be in them only if they were attached to the Branch of the original tree, and that He would pick them up and secure them there if the apples let Him.

The Gardener's job, then, was to persuade the apples of His solution; a miracle was possible. He chose to come down to the level of the fallen apples and speak their language. He would even give a precious piece of Himself to demonstrate wonderful miracles to clearly show He was the source of them. Perhaps, they would listen then. Still, many apples refused to believe the significance of these miracles, or that they even happened at all. Some were even angered by this demonstration because it interrupted their own solutions and plans for the apple breeds. Many refused to even acknowledge the existence of the Gardner and convinced others of the same.

I believe I have infinite value in Him. Without Him, I don't know, and can't fully know, who I am. I believe I don't get to decide what tree the Gardener planted, or from which Branch I am to blossom. He needs to tell me and I need to listen, otherwise, I'm merely kidding myself. After all, it's His garden, His design. I believe the Gardener is worth listening to above all others. I believe without Him, my perceived value of the whole scheme of things is severely diminished because my vision would be severely limited. I cannot develop a bird's eye view from ground level. How can I get a God's eye view without His Spirit?

I believe humans are products of their own gardening, spreading seeds apart from the Gardener, even though His garden is where it all started. In these separate gardens, some apples go bad. Sometimes the entire garden goes bad. Most apples never reach their full potential. All gardens have such apples and hence a garden will never reach its full potential, except the garden planted by the Gardener.

Where there are gardens, the will of weeds is never overcome. We've made a mess of what we've been given. We cannot even imagine what it could have been. We seldom try. The best we can do is settle for the mere humanity we are, hoping to practice and spread empathy and compassion. When we do, we think we're ahead of the game. We do not realize how short of the Gardener's vision we fall. Instead, we think, "This is the hand I've been dealt." Let us make the most of it.

Some think they discovered their life's purpose, but few have. Most know they haven't. Many give up on thinking there even is a purpose and vision at all. They are too proud to admit defeat and grasp the Gardener's hand that is so lovingly reaching out to them. Many see the messes the apple breeds have made and blame the Gardener. They do not know how pure are the motives of the Gardener. Some feel pushed to accomplish great things, but they don't know the source of it. They may call it God, and it may very well be. But, they do not seek to know God as a person.

I believe He, God, the Gardener, is my Father and I am His son, and that Jesus Christ is my brother. I am not the apple of His eye, I am His eye. His Spirit is in me. Yet, this was not my own doing. It was not according to my terms. This is His will for me. I believe the same offer is made to everyone. Where do I get these ideas? Directly from His word.