Love, the Soul of Genius

"Neither a lofty degree of intelligence nor imagination nor both together go to the making of genius. Love, love, love, that is the soul of genius." -- Wolfgang Amadeus Mozart 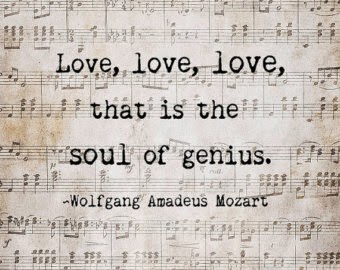 I love this quote. (I must be a genius!) Actually, I thought determining genius had to do with measuring IQ. Albert Einstein was obviously a genius, not a musical one perhaps, though he played violin, but an intellectual one. Then I thought genius came in seven flavors as described by multiple intelligences. Michael Jordan is a genius of bodily-kinesthetic nature.

A genius who performs extraordinarily well is an amazing thing. I am bewildered and dazzled! But experience tells me that real genius, as Mozart suggests, comes from the choice to love, that genius has a soul. I cannot choose the gift of intellect or bodily-kinesthetic ability or one of the other multiple intelligences, but I can choose the gift of love. Perhaps, I can choose to be a genius.

Dr. Theodore Kaczynski will be remembered most as the Unabomber. But he was highly intelligent in complex branches of mathematics and made significant contributions through his work. Was this man intelligent? Yes. Was he mentally and/or emotionally damaged? Probably. Did he love, deeply and compassionately? I don't think so. At least I see no evidence of this. In my opinion, he was not a genius because his genius had no soul.

My mother often said to me, "You're a genius and a lovely person." Unfortunately, it was not expressed in a loving way. It was more cliché than meaningful. I came to despise that remark and regretted its use on me. It wasn't until much later that I could even think that those words could ever genuinely apply to me. Hence, true genius only took on significance when love was brought into the equation.

For example, I learned to play piano late in life. I had wanted to play for a long time. I loved classical music, especially symphonic sonatas and piano concerti. I especially adored Mozart's compositions. (I watched a lot of Bugs Bunny as a kid! Classical music was always in the background and sometimes the theme of a strip.) My piano teacher was amazed at how quickly I picked it up. However, I knew it was not just the practice that mattered. Advancement was limited with mere practice. What bolstered my playing was when I practiced while I was filled with love for the music. To be filled with love for music was a conscious choice. I don't claim to be a musical genius, far from it (bewilder or dazzle don't enter the vocabulary), but I do know it makes all the difference. Perhaps musical genius is possibility for me. From this experience I understood what Mozart meant.

This applies to life in general, I think. One can live a life of genius by choosing a life with soul. And the soul of genius is love. It matters little what you're doing so long as you're doing it with love. M. Scott Peck, MD, described love as "The will to extend one's self for the purpose of nurturing one's own or another's spiritual growth." So, if you don't see yourself as a genius yet, you can be.

What do you think of the quote from Mozart? What do you think of the quote from M. Scott Peck, MD? Did you ever consider yourself a 'genius' in any way, or even think the term could apply to you? What are you really good at, that you love to do, that you take for granted? Why do you think or feel is this not genius if you said 'no' to the previous question? Do you ever wish you could be a genius in something? Do you wish you could love more deeply and compassionately but feel 'stuck'? What is your first impression when you hear the word 'genius'? Did you ever associate the word 'genius' with the word 'love'?
Please leave your comments. Expressing your views is refreshing to all who read them, including yourself. Thanks.

Email ThisBlogThis!Share to TwitterShare to FacebookShare to Pinterest
Labels: Purpose

Love in its many forms of course makes genius....because you love what you do, of course. But there must be more. You must love the people who are connected to your own love, and you must love them deeply. And we are all connected.

Of course, you must love yourself enough to invest in love. It's a door that goes both ways, to the outer and the inner and back out again.

I used "of course" far too many times in that posting, of course. Sorry. Haven't had my coffee yet.

Hi Luxurious. You said, "you must love yourself enough to invest in love." Great point! The Bible says to "love your neighbor as yourself." The statements are similar in that you cannot love another unless you first love yourself. Perhaps we can start by "taking the plank out of our own eye so that we can see clearly to remove the speck that is in our brother's or sister's eye."

I don't think I have ever associated genius with love. Mozart had a truly divine gift. But the kind of genius borne of love isn't necessarily measured in early or precocious accomplishment. It is more along the Mother Theresa, Princess Diana, Dr. Schweitzer lines...when one is in complete service to their world. That quality is as rare as a Mozart caliber musician, an Einstein caliber physicist, and far more needed in this world. I have always appreciated, even envied, a truly gifted intellect, but a truly loving soul, now that is something to which to aspire.

I had another thought. I am sure there are many geniuses that never come to the fore. Those who are known for their genius are because they are free from, or have conquered fear. Fear is an extremely limiting factor--an unbelievable weight on the soul, mind and body. Fear of failure, fear of being hurt, fear of criticism. It is the reason behind some very poor decisions in my own life. Once free of fear, the soul gains its wings. It soars, the heart opens and loves freely. The mind and heart find its full expression, and then genius becomes known.

Or maybe genius is just an undeniable force, unrelated to fear or love. Something that, in its fullest form, demands the prodigious output that we see.

Whichever the case, I am no genius.

You are so right, rp. Fear is big factor in so many things.

I was recently talking to a business acquaintance, David, and found out that he snowboards. I shared a story about my friend's son who isn't afraid to try any new tricks on snow skis. David said, and I acknowledged, that overcoming fear (or not having it) is 90% of the battle of conquering a new trick.

You're also right in that it's amazing what someone can accomplish when fear is not a factor.

I've brought up the Bible before and I'm going to do it again. I hope I'm not offending anyone. It says "Perfect love casts out fear." What do you think about this?