I have no greater joy than to hear that my children are walking in the truth. (3 John 1:4 ESV) 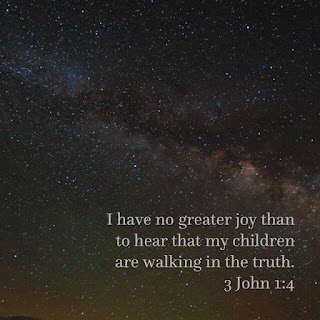 For a long time, I certainly didn't "walk in the truth." Not even near it. I didn't know what the truth was, or why I should care. I was occasionally curious enough to extend some sort of effort to find out. But mostly not.

Was truth even knowable? If so, who was closest to finding out? Scientists? Philosophers? The classical writers? Ancient civilizations? Religious leaders? Seminary scholars? Spiritual gurus? Mom? Dad?

Maybe truth wasn't knowable, even though it sometimes tugged on me hard enough that I'd slip into its pursuit. Maybe it wasn't even relevant to life. So what if I found truth? What would I do with it? Would anyone believe me?

Then one day my older brother shipped to boot camp in preparation for his Navy career. I was given a small box of stuff he brought with him, but couldn't keep while there.

One of its content items was a Bible. Curious, I picked it up and started reading it, randomly. The book of Proverbs was particularly interesting, very interesting. In fact, at times I felt Someone had been watching me over my shoulder, and they knew me better than I knew myself. Where did such wisdom come from?!

I opened other books within its covers and had two thoughts as I read: 1) this was incredibly profound, and 2) this was incredibly confusing. I'd have to come back to this, but for now I had young adult issues to deal with. Discovering truth was an on/off, fair-weather friend kind of a relationship, even while at church.

Fast forward to today. I know now God's Spirit, through His common grace, was convincing me that the light I was seeing at the end of proverbial tunnel was real.

It's been a twisty, challenging, refreshing, gritty, painful, joyful journey coming to know God, and being saved, all the while struggling to make sense of His place in the world. Why did denominations compete? Why were there still apparently conflicting verses in Scripture? And most of all, having turned to many resources to help me understand, why did I believe what I truly believed?

Was there more truth beyond the salvation of my soul and visible changes in moral behavior? Was worship more than gathering together on a weekly basis? Mostly, could I prove (to myself) from Scripture, not from among man's many interpretations, that God's word made perfect sense?

It was with such gladness in my heart that I discovered the positive answers to those questions, especially the latter. Then I recognized my salvation, as great as it was, was merely a door. Far more truths, deeper truths, were awaiting me inside its warm walls and cathedral ceilings.

God's Spirit Himself would guide me into many rooms, and the whole structure would glory in its exquisite details. I stood at the threshold of a gorgeous mansion when I realized I was neither visitor nor guest. I was home.

My heart rejoices greatly. And now it brings me such joy to hear when others have gone beyond the threshold and into the mansion, walking in the light as He is in the light. Walking as One in the Spirit.

Thank you for reading.
Posted by Dwight at 11:09 AM

Email ThisBlogThis!Share to TwitterShare to FacebookShare to Pinterest
Labels: Married to Christ