For freedom Christ has set us free; stand firm therefore, and do not submit again to a yoke of slavery. For you were called to freedom, brothers. Only do not use your freedom as an opportunity for the flesh, but through love serve one another. But I say, walk by the Spirit, and you will not gratify the desires of the flesh. (Galatians 5:1, 13, 16 ESV) 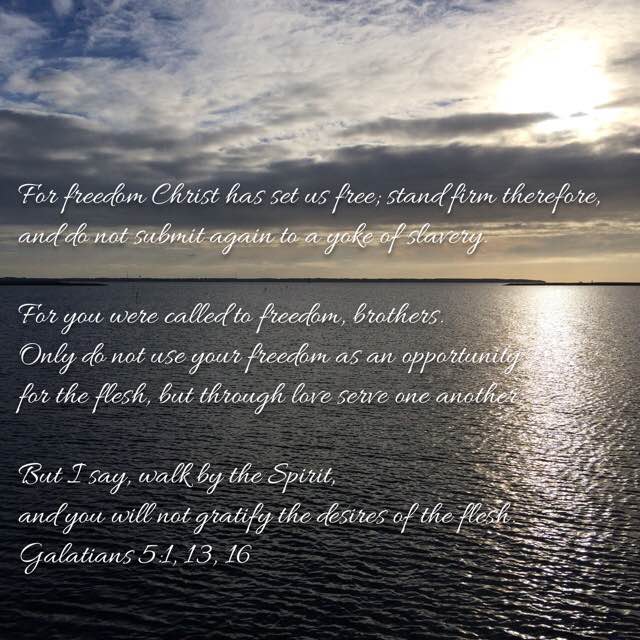 Gorgeous view of the bay near sunset from Route 64 bridge heading west toward home from Nags Head, NC, where I spent the day with my friend Steve and his family. Wonderful time. Lovely family. Good man.

Beautiful scenery, too. Reminds me of freedom. In this case, freedom from a huge, deceptive lie.

The yoke of slavery was not slapped around my neck and bolted while I was distracted or unconscious. Rather, I walked in to a popular outlet that sold them for a tithe, eyes wide open, and admired their sturdy, aromatic, and decorative qualities. I thought it would be good to wear one and it would look good on me, or I in it.

So I slipped it on. At first, I took it off and put it on as the mood fit. Eventually, I wore it all the time, even sleeping with it on.

After a while, however, something didn't seem right. Its qualities I once admired, I noticed, were merely external. I wasn't becoming sturdier. I was starting to look like a hypocrite to those who knew me, including myself.

In addition, it was feeling tighter, even if only in my mind. When I went to adjust it, I noticed it was stuck. It had fused with the skin of my neck.

I had to make a choice. Would I scrub it off by the washing of water with the Word? Or would I try to ignore the discomfort, think of something else, busy myself with rituals, and get used to it?

I knew the former choice would be a path of pain and suffering before it got better. It might even leave scars. Likely so, but still I clung to the hope of it getting better.

I knew the latter choice would be torture. I couldn't pretend my heart matched the appearance or ever would. I was no longer motivated to fit in. Besides, I couldn't ignore the slow tightening of the yoke like a noose; it would eventually strangle me.

Freedom came with a fight.

For some battles, I'm sorry. I didn't mean to hurt you in the separation process. I was wielding weapons of warfare I hadn't yet been trained to use. I was cocky as a toddler with a red cape and a pencil-sword. And just as annoying.

Eventually, I acknowledged the fight was inward, not external. I wasn't going to be able to release the yoke by yanking and criticizing it. Nor was I wrestling with the flesh and blood of those who sold it.

I became more focused on fighting the good fight, contending for the faith in my own mind and heart. The Word of God would provide the armor I needed for the real battle.

As I focused, new skin on my neck provided healing from the inside out, becoming transformed by the renewal of my mind and heart. The yoke lost its grip as I shed the old layers of lifeless cells.

One day, it just slipped off and fell. My yanking it was only counter-productive; a lesson I had to learn. I stared at the crumpled yoke, with its claw marks and stains of dried blood lying in a heap at my feet, wondering why I ever admired it.

Then I looked up to the heavens and smiled, recognizing the Word coming alive within me. Healing and transformation had come as I humbly abided in Him. Not to impress, for that was the lie. Not to judge others or be judged by others, for that was the deception. But to know the truth.

The Son had set me free and I was free indeed.
Posted by Dwight at 8:37 PM