The Kitchen Table of My Youth

I picture the kitchen table of my youth as mostly bare and vacant. Visions play back like a bad Super-8 home movie when color film first became popular: faded color washed in cloudy yellowish muck, magnified hairs floating on and off the screen, camera skips and shakes.

It's a small rectangle with a hard, flat surface of cool gray Formica, unmistakable 70's style. 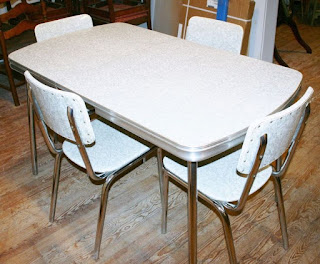 If I try to picture someone seated at the table, it's usually my mother my mind's eye recalls. A Kool menthol cigarette propped between two stiffly extended digits show smoking is not enough to relax her. Neither is the Schlitz can of beer in the other hand, nor the two combined, nor the idle, unfocused stare.

One long side of the table, edged with dull silver metal and held up with skinny tubular legs, is against a wall. It only sits three unless we pull the table out from the wall. But we seldom ate together. We don't need the leaf. That's for when we have guests. The leaf remained like new.

On the other side of the kitchen, opposite the table is a wall-to-refrigerator counter top with an aged-white porcelain sink in the middle. There was a doorway with no door from the main hallway. The counter on the left, window straight ahead, kitchen table on the far right, stove on the immediate right.

Passing between the table and the stove, I could go through another door-less doorway into the dining room where we had holiday dinners with our small, extended family, usually my grandmother and sometimes my uncle, or we did homework during school months, until we started partying instead.

If I stood in the kitchen at that doorway, I'd be directly behind my mother, her back to me, with the wall oven on my right, next to the stove I'd pass. If I glanced downward to the left to the area in front of my mother, I could see the cigarette burning and drops of liquid at the lip of the beer can near its opening.

But, I didn't have to be directly behind her to see those things. I could see them anywhere, anytime. Those images of her as the numb central character of my youth, supposedly playing the role of my mother, smoking packs and drinking from cans, were already etched on the screen of my primary visual cortex. That's probably why I mostly remember the kitchen table as bare and vacant.

Email ThisBlogThis!Share to TwitterShare to FacebookShare to Pinterest
Labels: Memoir